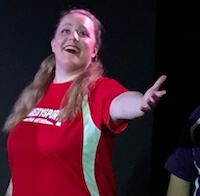 Bio: It all started when I was a wee tot. I loved to make believe and play pretend whenever I had the chance. Ninja Turtles and Power Rangers were my jam and I would always make sure I was my favorite character on the playground. My overactive imagination translated well to school plays and to an eventual BFA in Theatre at Texas State. Doing musical theatre became my passion and about four years ago I did a little show called The Who’s Tommy at the Public Theatre. That’s where I met my best friend. The Tina Fey to my Amy Poehler, the Damien to my Janice, The Meryl Streep to my… Hillary Clinton? Seriously? That’s Meryl Streep’s Best Friend? Anyways… he is the James to my Sara and my bestie with … well you get the idea. ❤️ He introduced me to ComedySportz and 2 years later (thanks Lex) here I am!!