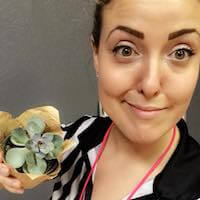 Bio: I started at COMEDYSPORTZ by taking a class. After my first couple classes I hated it because it made me do things I wasn’t comfortable doing such as get up in front of large groups of people and act like nobody’s looking. However the second I got my first time on stage in front of the bright lights it was over, I was done for, I could never not do this for the rest of my life. I currently preform in a long form duo called Whine Time and have played in comedy festivals. I love to travel and play at other CSz locations. I am currently the owner of CSzSA. I’m the proud wife of a guy named Joe and mom to two wonderful little boys. I once tripped over David Robinson’s foot on an airplane.