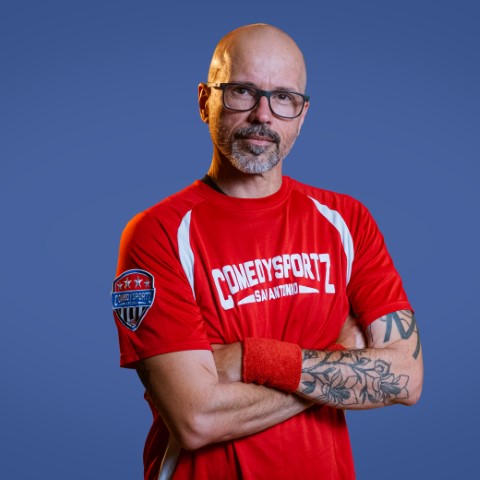 Bio: Dave came to ComedySportz late in life. Like, REAL late in life… Like, almost TOO late. Not that there are any actual CSz age limits. Not at all. But one would agree that there is a very physical aspect to this sport(z) and Dave’s doctors have consistently advised him that his body is not unlike a Faberge Egg. Exquisite and invaluable? Absolutely… But also as delicate as a soap bubble. Dave plays with the sobering knowledge that every match could be his last and that one day the bough will most certainly break and his mortal vessel will - no doubt - retire itself. We pray that should that day come and should it occur on the field of play, that there is - at the very least - just enough adrenaline coursing through his veins that he is able to hoist his brittle bird bones up and out of sight from the eyes of our younger loyal fanz for fear they begin to question their own mortality far sooner than need be. In effect, watching Dave play is a lot like watching NASCAR… There is no guarantee of a horrible accident, but you… well, you know… Dave can also be seen around town performing with his similarly addled compatriots, GRUMPY OLD MEN. Such a brave, misguided soul. We urge you to come out and see him before it is too late.